Here’s what they advertise (above):

And here’s what you get (below):

Score 6/10 – The protein and veggies lay atop a bed of brown rice. The chicken is cooked nicely offering a light layer of charred edges, finished off with a drizzle of sauce and sesame seeds sprinkles. The sauce tucked away nicely, soaking mainly into a portion of the bed of rice. The dumplings arrived upside-down, and didn’t have any inviting color (but some dumplings don’t have much color).

Score 7/10 – The first thing you’ll notice is that the BBQ chicken is marinated thoroughly, cause it to be tasty, yet very salty. The plain brown rice helps to even out the palate after biting into the chicken. The broccoli is also cooked well, and surprisingly still some fresh color, even after sitting in a box for a period of time. The dumplings are underseasoned compared to the chicken, but it also works to even out the saltiness, as with the rice. The filling is a bit mushy for my taste, but the wrapper has good texture. I initially felt like I was missing a dipping sauce, but in the end, didn’t need it.

YES – This is a solid dish that I have already ordered about a dozen times. 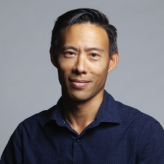